California’s rich history, innovative spirit, and incredibly diverse geography and demographics continue to attract visitors from all over the world. California has built strong working relationships with international partners and organizations through collaborative initiatives and engagement of fruitful discussions. During emergencies, these international collaborations are vital for a shared exchange of resources and mutual aid to areas devastated by disasters throughout the world. Due to California’s diverse geography, the state experiences all types of disasters, including wildfires, floods, earthquakes, tsunamis, and drought. The increasing occurrences of these disasters have spotlighted global awareness of California’s expertise in emergency management. Countries and international organizations around the world are interested in engaging with California on emergency management and disaster preparedness by sharing best practices, lessons learned, training opportunities, and technology.

The International Affairs Office within the Governor’s Office of Emergency Services (Cal OES) is the liaison for all international affairs. This includes coordinating foreign delegation visits, negotiating, and developing binational memorandums of understanding, advising on international policy, working with foreign governments to coordinate mutual aid during disasters, and working with Community-Based Organizations to provide resources on emergency preparedness for the vulnerable population. Cal OES has entered into Memorandums of Understanding with international partners and organizations including the Aga Khan Development Network (AKDN), Australia, Baja California North in Mexico, and Chile. These international agreements foster cooperation and a commitment to share best practices, lessons learned, training opportunities, and mutual exchange of technical knowledge and expertise.

The International Affairs Office is responsible for the coordination of foreign delegation visits. The purpose of the visits is for a mutual exchange of best practices, lessons learned, disaster response gaps with a focus on emergency management, technical expertise, homeland security, and cybersecurity. 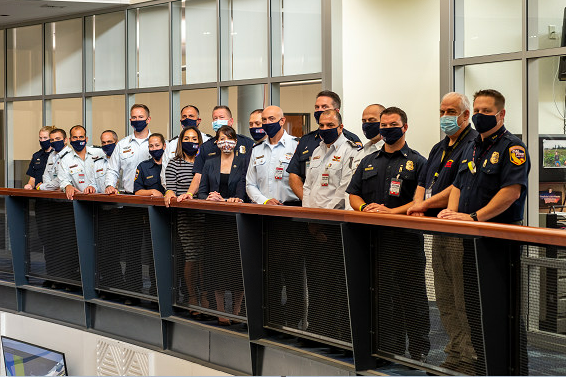 The International Affairs Office coordinated a donation of approximately 4 million in Personal Protective Equipment (PPE) for the State of Baja California’s Secretary of Health, the City of Mexicali, and non-governmental organizations to support COVID-19 containment efforts along the California-Mexico border region. During the early stages of the COVID-19 pandemic, the office coordinated with thirteen countries who donated 3 million in Personal Protective Equipment (PPE) to aid California in slowing the spread of the virus.

During disasters, the role of the International Affairs Office is to collaborate and work with the State Department, Consular Corps, and many Community-Based Organizations by sharing disaster information of the impacted areas and resources available for the vulnerable populations, such as immigrants, farmworkers, and the undocumented. The office works jointly with the Consulates and Community-Based Organizations by identifying unmet needs within their communities and stakeholders and disseminates resource information, such as grant opportunities and disaster guides. In coordination with Listos California, the International Affairs Office provided over 19,000 printed copies of the Farmworker Disaster Guide and Disaster Ready Guide to the consulates to disseminate within their jurisdictions. 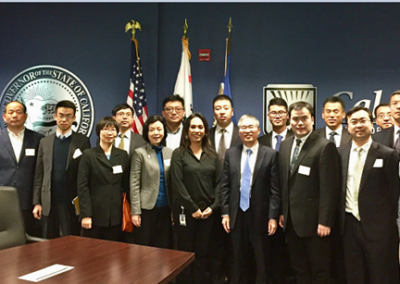 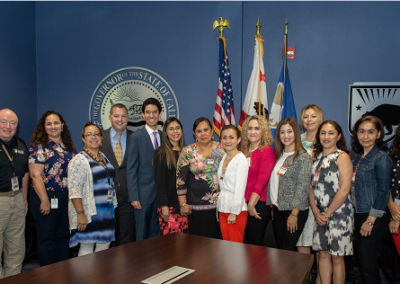 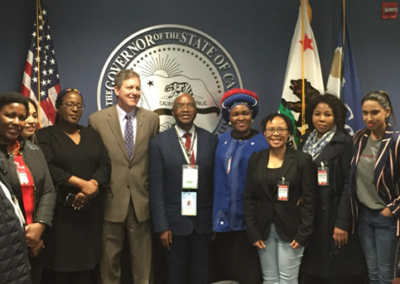 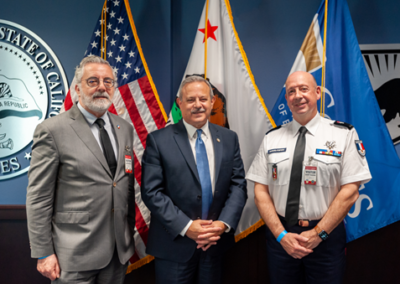 To facilitate safe and secure visits, foreign delegations requesting to visit California state agencies need to complete and submit the Foreign National Screening Form 15 days before an official visit. Emailed the form to Travelsecurity@caloes.ca.gov and the Cal OES International Affairs points of contact.

If you represent an international organization or country and would like to request a visit to the California Governor’s Office of Emergency Services, please complete and submit the Cal OES Foreign National Screening Form and Visit Request Form to the International Affairs Office points of contact.

Cal OES signed an MOU with the Aga Khan Development Network (AKDN) Disaster Risk Management Initiative and Focus Humanitarian Assistance USA. The AKDN works in over 30 countries around the world and is a group of development agencies focused on environmental protection, health, education, as well as disaster reduction. Through this partnership, Cal OES and the AKDN share best practices, training, exchange of expertise, and technical assistance. The MOU provides a platform to collaborate in the advancement of emergency management, disaster mitigation and preparedness programs, training, sharing best practices, technologies, and research.

As action item under the MOU, Cal OES attended a conference in Chile on crisis communications. Pictured in the middle is Sebastián Piñera President of Chile with representatives from Cal OES and CAL FIRE..

Cal OES signed an MOU with the Chilean National Office of Emergency of the Interior Ministry (ONEMI) focused on joint projects and research studies in emergency response and recovery, training opportunities, and exchanging of information on disaster risk. Additionally, Cal OES continues to participate in the Chile-California Council, a non-profit organization that promotes mutually beneficial relationships and knowledge sharing between Chile and California in both the private and public sectors. 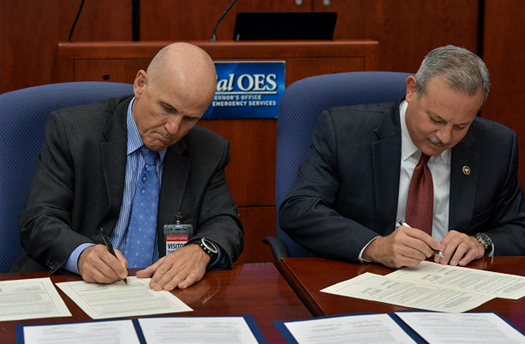 MOU signing between Cal OES and the State Coordination of Civil Protection of Baja California North.

Cal OES signed an MOU with the State Coordination of Civil Protection of Baja California North focused on sharing intelligence resources, designing cooperative projects and research regarding risks and natural disasters, as well as training, and designing communication strategies for disaster response.